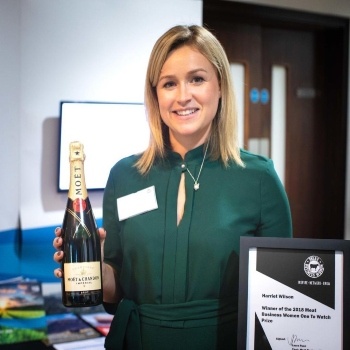 Harriet is Agriculture & Sustainable Sourcing Manager for McDonald’s UK & Ireland, where she started in July 2020.

Previous to this new role she was Corporate Responsibility Manager for ALDI UK & Ireland, responsible for Farming, Fish, Forestry and Fair Trade. Here she introduced ALDI’s first Farming and Fish Strategy to drive in areas of provenance, animal health and welfare and environmental protection.

She spent four years working for Co-op Food as Senior Agricultural Manager. During her time within the agricultural team she headed up the 2017 British sourcing campaign, and developed their young farmers scheme (Farming Pioneers Programme), integrated calf scheme and Dairy Group model.

Harriet grew up on her family’s beef & sheep farm in Staffordshire and graduated from Harper Adams University in 2014, having spent her placement year as Agricultural Assurance Co-ordinator at McDonald’s. Her work experience has spanned various parts of the farming and food industry, including a summer placement within the Sainsbury’s agriculture team and she is a previous columnist for the Farmers Weekly.

In 2018, she received the Meat Business Women ‘One to Watch’ Award and in 2017 was named a ‘Rising Star’ by Farmers Weekly.

Harriet is a member of the NFU’s Next Generation Policy Forum and was an active Young Farmers’ member, where she was chairman of the National Agricultural and Rural Affairs Steering Group. She continues to be a club leader for her local club Eccleshall YFC where she enjoys coaching younger members in public speaking and stock judging, as well as organising various charity events.