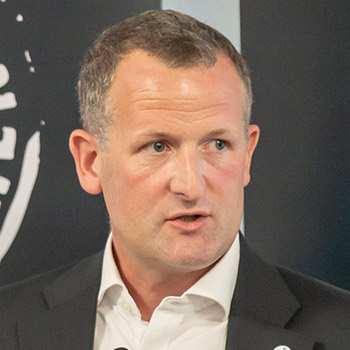 Niall joined the Dawn Graduate Programme after University and he progressed through the organisation, he was appointed Chief Executive in 2007.  Niall oversees the company’s extensive operations with 22 production facilities in Ireland and the UK, and 10 sales offices in Europe and Asia, earning revenues over €2bn, and employing over 7,200 staff in eight countries.

Niall and his team have spearheaded the development of the Group through mergers and acquisitions in key strategic markets.  In 2015 Dawn invested in Elivia, France’s 2nd largest beef processor and In October 2017 Dawn Meats merged its UK business with Dungannon-based Dunbia, and acquired their facilities in Ireland.

Throughout his career, Niall has focused on the culture of the company and developing the skills and capability of the Management Team to facilitate the successful expansion of Dawn Meats.

Niall champions environmental sustainability and efficient processing, which has resulted in Dawn being internationally recognised by its customers worldwide.  Dawn’s goal is to become Europe’s most sustainable meat company and it has set itself targets for 2025 of reducing water and energy intensity by 40%, and CO2 emission intensity by 50%.